The Berlin E-Prix will also host the next FIA Girls on Track event, of which ABB is global partner. One of the workshops will be focused on ABB robotics, featuring two of the company’s most innovative collaborative robots – YuMi and GoFa. Further supporting this partnership, ABB’s latest video in its FIA Girls on Track series has been released ahead of the race. Following Berlin, the ABB FIA Formula E World Championship heads to Jakarta for round nine on June 4. By connecting software to its electrification, robotics, automation and motion portfolio, ABB pushes the boundaries of technology to drive performance to new levels. 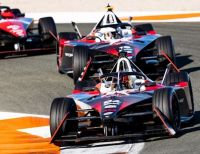