Now, they’ve shown that they can track the robots precisely using the light they emit and just three smartphone cameras. The tiny artificial muscles that control the robots’ wings emit colored light during flight. However, the zinc particles only light up in the presence of a very strong and high-frequency electric field. This electric field excites the electrons in the zinc particles, which then emit subatomic particles of light known as photons. As they prototyped the actuator, they found that adding zinc particles reduced its quality, causing it to break down more easily. 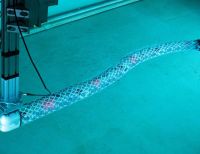